I recently became unemployed. The story is long and ridiculous, but I’ll save it for another day.  Right now, I want to talk about an interview I had.

Though I found the ad on a prominent resume site, the interview turned out to be for a coveted position on the bottom level of a pyramid scheme.

The first salesmen worked for a marketing firm.  I didn’t figure this out until they’d conned me into coming back for a “second round” of interviews, and convinced me that I was “shadowing” another employee. They persuaded me to drive with this employee to another city. My previous employment had also involved several rounds of interviews, including an on-site “interactive,” so this did not, at first, strike me as a bad idea.

My car, being in the first city, was of no use, and the next eight hours could best be described as a production of Sartre’s No Exit by prisoners on the Bataan Death March. By around three thirty, exhausted, I became unstuck in time and was transported to a zoo on the planet Tralfamadore.

He appeared genuinely certain that he was on the fast-track to riches. He made sure I noticed his copy of “The Seven Habits of Highly Effective People” and belabored the incredible insights he’s gained from Tony Robbins.  I had somehow gone my entire life in blissful ignorance of this dudebro.  For the uninitiated, he’s a motivational speaker and professional bullshit artist who bears a suspicious resemblance to the James Bond character, Jaws. Like the crystal healer who uses homeopathic cold medicine, he just couldn’t stop at one scam, a phenomenon known as “crank magnetism.”

I’m not saying he’s an evil henchman of a Bond villain, but I bet he gives great speeches before          turning the death laser on an incapacitated hero.  Nothing can stop him now!

He listens to Tony Robbins CDs on his 60 mile round trip commute from the office his putative boss rents from a pseudo-executive cubicle-rental service, to the customers he’s going to bother that day. He has to pay for his own gas, which is totally fair. As he explained, “I have to have an entrepreneur mindset. If I were an entrepreneur, I would have to pay for my own gas.” I pointed out that his boss takes a cut of his commission, and so he’s effectively paying for his ersatz entrepreneur boss’ gas, and he countered that of course the boss makes more money if his company made more money.

According to my friend the entrepreneur, Tony Robbins and his employment as traveling copy toner salesman have honed his talents and communication skills. Since the only skill I saw him demonstrate was his virtuoso ability to carry around a catalog and open at the perfect moment – near “decision-makers” – before the receptionist asked him to leave, and because his pitch consisted of, “Hi, I’m here for…uh….quill?” (invariably, every time, as if he were lost), he must have been near feral before he got this position.

Tragically, he felt I did not measure up to his standards. I suspect this because he said so, explaining slowly, using small words so that I could follow his melon-sharp reasoning, that I was just not a good fit for the “position” because I would not work hard enough to be successful at it. Actually, that’s probably true, but I still pointed out that since he isn’t “promoted” to assistant manager until he passes on the sacred and holy trade of catalog-porter to four other best-‘n-brightests, he has no control over how successful he is.

When asked to elaborate, I had to say bluntly that he had no control over whether I wanted to work there. “Yes, actually, I’d argue that I do have control over whether you want to work here.”  And while it may look suspiciously like a pyramid scheme, I learned that the difference is that they were “representing” Fortune 500 companies. I had mistakenly assumed it had something to do with the whole pyramid shape. 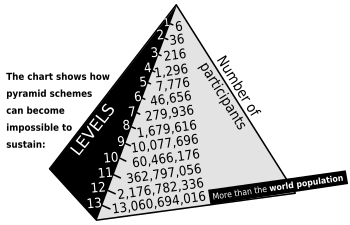 There were warning signs, of course, that I had found myself the sharpest knife in a drawer full of spoons. The salesman I was shadowing was unequivocally and openly captivated by everything I had to say about myself and my opinions.

It’s not that I don’t recognize how awesome and perfect I am – I do – but I don’t expect other people to realize it that quickly, especially not the kind of people who fall for pyramid schemes. The coors-lite dudebro is not a discriminating oenophile, and his ebullient praise for the magesty of your merlot non-pareil  might just be a sign that he’s up to something.

During the morning “meeting,” where we were mysteriously forbidden from sitting (I can only conclude that they rented the one office and the right to use the shared conference room, but couldn’t afford chair privileges), there were several instances where lists of numbers needed basic arithmetic operations applied to them.

For instance, what’s $120,000 times 20 years? Everyone got out their phones.  Or what does this other list of numbers, that are completely ad hoc estimates of life expenses, add up to? 1.7 million, I said, naively assuming that since we’d made up these numbers, and because I passed second grade, Idid not need exact precision. I was wrong, and another representative took it upon himself to foil my evil plan to not need to get out my phone.  To do this, and to simultaneously flaunt his impressive knowledge of math jargon, he stated twice that it was only 1.7 million “if you round up,” thus exposing me for the hideous fraud I am.

The second salesman, I met after answering a campus flier promising free food. Like most college students and unemployed degree-havers, I spend most of my time suppressing the nagging thought that someday, I will need to purchase more food. So when I saw an ad for “free Korean barbecue! No strings attached!” my higher brain functions were temporarily too overwhelmed with the promise of kibbles to question the occult motivations of the interlocutor.  So I holla’d at my buddy, Jim-bob, and off we went.

Like most free-chow mixers, the food was closer to the “Costco bag of frozen meatballs” end of the tasty-meat spectrum.  There was also day-old rice and some suspiciously wilted bags of tea and cocoa that you could enjoy with your cup of room-temperature water.

We were quickly approached by  the two people who were apparently under order to become our new BFFs, and told that there was a concert coming up.  It sure would be lovely if we could stay!

After the eardrum-rupturing music of a forgettable Christian rock cover band (at least, I hope they didn’t write that music; I wouldn’t want to take credit for those songs), I learned about all of the fantastic benefits of joining this particular fellowship. My new bestie made sure I saw her copy of Mere Christianity and, after the “concert,” invited me to come back with them to their church, which I foolishly assumed was one of the forty-five thousand churches within walking distance to campus.

Instead, they drove me to another city – on an island, no less – trapping me there for their service and fun, wholesome, sex-segregated game-like activities (and, if I was still hungry, more of the meatballs from dinner, which had spent three hours dessicating into sad, crunchy lumps of nihilism. Imagine stale gumballs without the flavor). Most people there were teenage freshmen, who, unlike me, had a good excuse for their naivete.

Finally, the pitch: it was another pyramid scheme; only this one somehow managed to be even worse than pushing copy toner. My first friend, the rugged entrepreneur in his own mind, at least had a picture of the product.  Whether any of his clients ever received their boxes of paper is beyond me, but everyone agreed about what copy toner was and why it was useful. While the hoops he had to jump through to become a manager were many, he had a shot at being promoted before he died.

Apparently, the person at the top of the second pyramid died several thousand years ago.   He got better, though, and how he’s watching over us from space, judging us on our commitment to the con and our ability to turn a no into a yes.  Like the mysterious subcorporation, Uh Quill?, this person could not be contacted directly by just anyone besides those he psychically called.

We know all of this is true because a couple of the original 11 second-level salesmen apparently wrote a book about it, and they totes swore that there were at least 500 other witnesses.  EYE WITNESSES.  And thousands more attended some kind of terrible fish and bread brunch buffet that proves, beyond the farthest-flung speck of a hint of doubt, that, at least before he died and became a magical zombie space ghost, this guy could summon sky fish when the mood struck him.

Then, and this is important, you give 10% of your income to the guy who brought you into con.  If you convince enough other people – people like me – to join the con, Space Ghost will look upon you favorably, and you may eventually be rewarded in some way, or be able to open your own regional office and accept 10% of other people’s money, too.

For purely ethnographic reasons, I kept attending this church for a few weeks. Everything was great: I made so many new, caring friends, including one who had warmed to me instantly, shared my experience of synesthesia, and even brought me al bondigas in a white tupperware bowl on a rainy day during finals; I was welcome despite being openly atheist; I was being specifically invited to the science-based sermons to give my perspective.  Sure, the one lecture I attended, Does God Exist?, can be summed up by the argument, “We are physically possible, and we physically exist, therefore, God,” but it was at least somewhere I felt accepted and free to voice my criticism.

And then, on a thread on the group’s website, where I’d been participating under my own name for several weeks, it came out that I didn’t subscribe to their gender binary. Whoops. Blasphemy! The pastor personally chastised me for using the phrase “erectile tissue” as part of a larger argument questioning the theological significance of being an innie or an outie.

He was shocked because I sure didn’t seem like “that kind of girl” when he met me, and forbade me from thereafter “referring to reproductive organs in terms of their function” (Hi, pastor? reproductive is a function of those unmentionable organs). I stated that this was a fundamental part of who I was. He expressed sadness at the pain and suffering I must have experienced “inside and out,” whatever that means, and said I had better make an appointment with him to talk in private.  I declined.

My new, generous Christian friend never came back to collect her tupperware. The entrepreneur just didn’t think I am the right fit for the opportunity.  So it goes.