This morning I was shuffling down the highway toward a science museum in the mom-van with the three kids in the back, watching Frozen. Like you do. Because it’s school vacation week around these parts. And because FROZEN. And as my daughter (first grade) was belting out “Let It Go” for the eighty bazillionth time, my mind started wandering to that blog post by Kathryn Skaggs (WBMW) about how Frozen is full of the Gay Agenda, which was in response to that policymic piece about how Frozen is basically the Pinnacle of Disney Progressivism.

Let me get one thing out of the way first, and that is that I am a premiere expert on the Gay Agenda and it has never looked as glamorous as anything on Frozen. My Gay Agenda revolves around shuttling little people to appointments, schools, swim lessons, soccer practices, play dates, libraries and other free activities, and birthday parties. My Gay Agenda takes me to work and back, those glorious days where I not only eat lunch at a prescribed time, but do it while getting PAID. But anyway. Frozen. Because I’m not at work this week. Because who needs to get paid? Do you want to build a snowman?

So this blogger purports that the Top Sooper Sekrit Message in Frozen is that Elsa’s power to make ice and snow is really a metaphor for same-sex attraction. And that Disney is really really stealthily showing all of our kids that society is really victimizing queers by locking them in their bedrooms and making them wear thick gloves and telling them not to have feelings. And by doing this, millions of kids all over the world are feeling sorry for Elsa and her locked-up powers, and will thus join the ranks of “gay sympathizers” and overthrow conservative America. (Umm, yay?) 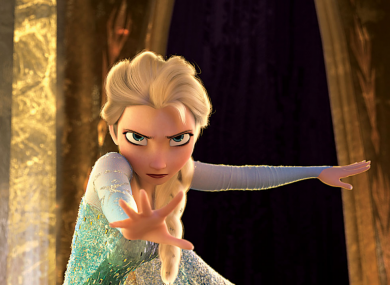 But I guess what I was thinking about on the highway this morning was the way the conservative sect can justify anything, anything at all, by talking long and loud enough. I’m the first to admit that I’ll look for the Gay Agenda in pretty much anything. I’ve gleefully taken my children to an Elton John themed kids’ birthday party, my daughter proudly told anyone who would listen on one of our vacations to Myrtle Beach that our family will not eat at Chik-Fil-A because “the owner man says that only a man and a woman can get married and we’re not going to give him any money for that,” and my preschool-age son once told me that I couldn’t possibly marry The Lizard (Spider-Man’s nemesis) “because he’s a boy, mama, and you can only marry a girl.” I love the Gay Agenda with my whole queer heart but I just plain don’t see it in Frozen, the movie with not one but TWO hetero love plots involving the same heroine. Because, well, one boyfriend is simply not enough! (And okay, the first one was a total tool.)

The self-titled “Well-Behaved Mormon Woman” says that, “The song, “Let It Go” intends to send a strong, liberating gay message,” and is, in essence, Elsa’s coming out song and personal Pride Parade all rolled into one. Now, wait a minute. This was the moment where I started to feel as cheated as Olaf in the summer.

My coming out, during my college years that seem like a lifetime ago, were much more subdued and far less “Total Eclipse of the Heart.” In fact, I think I vaguely remember telling various members of my family that I had dated some boys, but liked girls too, in some sort of nonchalant way that really meant ‘this is hardly your business but well, it’s something to talk about over the long weekend while I do my laundry.’ I don’t recall a moment of coming out to friends and there never was a need to have a sit-down. I went through high school expressing attraction to both male and female celebrities and classmates and nobody cared. Possibly because I played softball. Or was fortunate to grow up in southern New England. (The cold never bothered me anyway.)

I’ve been watching my partner come out in dribbles over the last few years and that is a bit more dramatic, possibly because I’m not one to sit quietly and watch things happen to other people very well but more plausibly because I’ve never before had the pleasure of witnessing the coming out process of a person in her 40s, let alone rode shotgun. I assure you, though, that even with a very long relationship with her late husband, the father of her child, and the sudden, swift entry into the Gay Agenda, she has neither created an ice castle or achieved glitzed-up ball gown sensation (although she does have the loveliest long blonde hair).

I can kind of separate reactions to my partner’s disclosure of our relationship into two categories – the THAT’S SO GREAT and the WHAT WENT WRONG? camps. Folks in our Disney Frozen world of liberal subterfuge largely filled their responses with smiles and the appreciation that she had found some happiness after a long and chaotic grieving process. And the others? Well, like the Mormon Woman, they went looking for the problem, looking for clues in her relationship with her son’s father for just how this tragedy could happen. “But I thought you had a good relationship.” “But I thought you and he were happy.” And let me tell you, nothing feels quite like the insinuation that your relationship stands on a foundation of misery or a past secret concern. (I guess she’s a bit of a fixer-upper?)

So I’ll let my little guys belt out “Let It Go” on an endless loop if it protects them, even a little bit, from a society that is willing to assume that their bonus mama is only in their lives because years back, some man must have done her wrong and led her astray. Because, well, what does that say about ME? That I’m a booby prize? A consolation? The end result of years of simmering man-hate? Eff that.

Either way, I’ll concede Disney’s role in promoting the Gay Agenda when they stop all the heteronormativity and happily ever after BS, not a moment sooner. And I’m not going to Let It Go.

Jude is not afraid to call out her privilege or toss out fancypants words like "intersectionality," but always with a smile. A social work superhero by day, she's glad to empower the voiceless to shout and the powerless to rise up. She's neck-deep in Tom-Mama Nirvana with three crazy gender-fluid monkeys and an endless desire to queer the PTO. Loves: asking questions, questioning answers, overanalyzing everything, and momming it up.
By Jude