The CDC issued guidelines in May of this year recommending that people at high risk for HIV transmission including men who have sex with men, people with HIV-1 positive partners, intravenous drug users and women who have unprotected sex with partners of uncertain status undergo pre-exposure prophylaxis (PrEP) regimens to prevent HIV infection. The WHO issued similar guidelines but targeted it directly at men who have sex with men worldwide. New York State governor, Andrew Cuomo, made PrEP a plank in his plan to reduce HIV cases in his state to 750 new cases/yearby 2020.

These guidelines and plans have not been without controversy. Opponents claim that Truvada use will increase risky sexual behavior and provide false senses of security, an attitude that has existed since Truvada was approved by the FDA in 2012 for preventative treatment. In a piece for the Huffington Post David Duran coined the term “Truvada Whores” and said in the piece “Having a “there’s a pill for that” attitude is absolutely disgusting…it’s something that has lifelong consequences, and I sincerely hope that Truvada PrEP is not encouraging the “there’s a pill for that” attitude.” Since then “Truvada Whores” has been mentioned in many New York Times pieces on the subject and has even been culture jammed by pro-Truvada anti-AIDS activists. Duran is not alone in his opinion, however. Michael Weinstein, head of the AIDS Healthcare Foundation has called Truvada “a profit-driven sex toy for rich Westerners”. Larry Kramer was quoted in the New York Times saying “Anybody who voluntarily takes an antiviral every day has got to have rocks in their heads. There’s something to me cowardly about taking Truvada instead of using a condom. You’re taking a drug that is poison to you, and it has lessened your energy to fight, to get involved, to do anything.”

But what does the science actually say? How does Truvada work? To understand this you will need a brief primer on the pathology and pathogenesis of HIV. HIV is a retrovirus spread through contact with semen, blood, vaginal fluid, pre-ejaculate and breast milk. HIV infects T-cells that express a cell surface marker called CD-4, commonly referred to as Helper T cells. It can also infect macrophages (“big eater” immune cells) and microglial cells (the macrophages of the brain). To infect a cell HIV must bind to the a surface receptor of the cell using one of its own envelope proteins. Once bound HIV surface proteins change conformation and insert viral RNA and proteins into the cell. Once inside an enzyme known as reverse transcriptase, the “retro” of “retrovirus”, transcribes the viral RNA into DNA, allowing the viral DNA to be inserted into the host genome. The viral DNA is read by the cell and expressed, generating viral protein and viral RNA for packaging into new, budding HIV virons at the cell surface. It’s this activity that causes the complications of HIV, the immunodeficiency from lack of healthy T-cells, leaving the body susceptible to pathogenic attack. 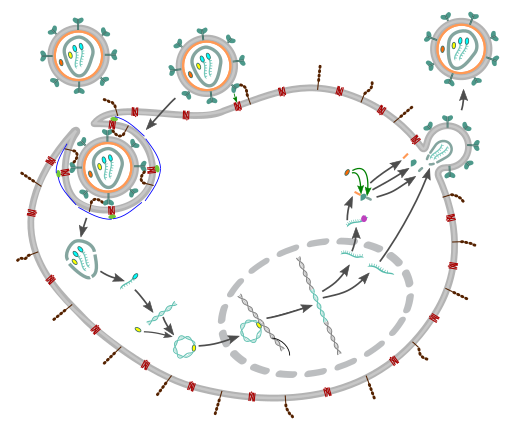 Truvada is actually a combination of two drugs, tenofovir and emtricitabine, that prevent the replication of HIV by stopping reverse transcriptase from transcribing viral RNA into viral DNA. They do this by out competing the binding of deoxyadenosine 5′-triphosphate and deoxycytidine 5′-triphosphate respectively. Those are nucleotides, the building blocks of DNA, specifically A and C of the ATCG nucleotide alphabet. When A and C cannot bind to a growing strand of viral DNA the synthesis process terminates and the DNA strand is left uncompleted. Metaphorically, Truvada denies the virus half the use of the alphabet while it is trying to write its own biography, greatly inhibiting the virus’s ability to propagate.

Truvada’s efficacy has been tested in a number of studies and the results have been encouraging. Truvada as part of a combined treatment with another antiretroviral was able to reduce viral burdens to undetectable levels in 87% of the Truvada group vs 65% in the other group. PrEP treatment patients who took four or more doses a week were 100% protected over a 72 week period with an estimated 0-1.06 HIV incidence in this population. This means that if 10,000 people adhered to the dose schedule for a year between 0-106 people would contract HIV. Participants who took fewer doses were at higher risk. Another study indicated a 92% risk reduction in patients who had Truvada in their systems. Neither study indicated “risk compensation”, eg decreased condom use, increased risky behavior, among the participants however there was a decrease in adherence to the drug regimen which is problematic if left unaddressed in public health measure. However a third study suggests that intermittent dosing may counter problems with adherence to treatment. Side effects in these studies were minimal. Scientists disagree as to how much to trust the 99% reduction estimate, but agree that the data is promising.

Where does that leave us? We now have a drug that looks spectacularly promising as an preventative measure for HIV and as an antiretroviral for use in combined therapies. The side effects are minimal because the active ingredients of Truvada target reverse transcriptase, which is not part of human cellular machinery, leaving patients with few side effects. Truvada’s efficacy is not completely clear but it looks like regular users will have 90% or higher reduced risk of contracting HIV. So what’s stopping us from using this drug? Several stories, including this one, have talked about the shame and stigma surrounding HIV infection, unprotected sex and the way this will disrupt the normalizing, pro-LGBT messages to the mainstream. Others have raised questions about whether this will come under attack by the Hobby Lobby decision. Lots of these objections ring like reproductive health arguments against “promiscuous women” and “sluts” and should be treated similarly. I think it’s fairly uncontroversial to say that nobody deserves to be infected with HIV, regardless of their sexual preferences. With condoms and Truveda we stand a good chance of cutting the legs out from under HIV infection. It would be an act of folly to let our shame get in the way.