Hello folks! I hope you enjoy my debut post on Queereka, and that you’ll check out the prior season 3 reviews of Orange is the New Black here and here. Let me know your thoughts in the comments!

Episode 5, “Fake it Til You Fake it Some More,” continued the theme of motherhood but also dug more deeply into the environment of prison and struggling to find an identity while incarcerated. The story arc of the prison existing under new management was pursued further with the introduction of a new job that paid one dollar an hour, a cause to rejoice. The new job was sewing women’s underwear for an outside company. When considering that miniscule compensation, we see how the inmates are dehumanized – a corporation that sells women’s lingerie is literally profiting from the pain and desperation of these women. It’s also interesting how this is the only job that does not somehow benefit the prisoners or build community (like cleaning bathrooms or working the kitchen does), yet it pays the most.

Additionally, the prison management clearly manipulated the women, ostensibly to keep the peace but also to build excitement over the new job. Administering a test consisting mostly of MBTI-style personality questions, and choosing to randomly select inmates without regard to the results, created a sense of self-doubt in many of the women. Maintaining control and reducing confidence seems to be an effective way to easily manage the inmates while reminding them of “their place.”

Perhaps most affected by test anxiety and the desire to feel worthy of the new job is Flaca, who is also the star of the flashback of this episode. It’s revealed that she wound up in prison after selling fake acid to several classmates in her high school, one of whom jumped off a building in response to his “trip.” One of the charges filed against her was fraud – which I find curious, since that term suggests that there is a “correct” or “legal” way to sell LSD, but I digress. Her mother was shown throughout her flashback as sewing clothes, and Flaca feeling as if it is a waste of time. She wanted to be something greater – but in prison, her aspiration was being worthy of the new job…sewing. This irony invites the viewer to think more deeply on perspective and what is considered “success” in life. 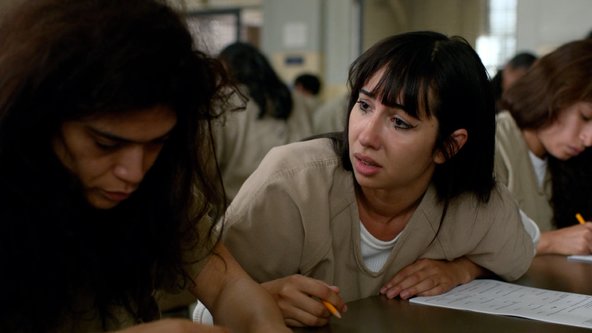 Flaca as a teenager, image from Netflix original Orange is the New Black

One of my new favorite characters, Chang, had her younger self introduced in the following episode, “Ching Chong Chang.” Not the most clever of titles, in my opinion, but onward! My previous impression of Chang was that you may hold for your friend’s somewhat out-of-touch grandmother, in part due to her age, but mostly because of her tendency to keep to herself. That impression could not be further from the truth – in fact, Chang’s story shocked me more than that of Rosa, the bank robber.

The reason Chang was sentenced to prison – selling illegal black market items such as rhino horns with her brother – was far less interesting than the kind of person she was. She was originally trusted to help with deliveries because of her ability to lay low and avoid attention, much like she is in present day. However, we caught a ruthless side to her that I certainly didn’t expect. Facing rejection after rejection due to her “homely” appearance (since when is acne a death sentence to romance?!), she became bitter and angry. So much so, in fact, that she commanded her brother and his lackeys to cut out the gallbladder of one of the men that rejected her. Her quiet ability to slip in and out of sight was exactly what made her so dangerous, and this explanation as to her current behavior seemed appropriate rather than forced. I was impressed with the writer’s ability to include her in the plot without offering a contrived storyline to explain why she’d never been previously featured.

Young Chang bein’ a badass. Image from Netflix’s Orange is the New Black


Orange found a way to make Chang’s ruthlessness into a joke when the new counselor, Birdie, offers a drama and improv class to the inmates. When challenged to “reimagine” a scene, Chang writes a bloodbath that would have put Tarantino to shame, complete with the details of her failed suitor’s disembowelment. When the rest of the class met the scene with shock, Suzanne brought Change some love. “…I liked it,” she said with a grin.

In between all of this, a new inmate makes the others aware that kosher meals (much more appetizing than the typical prison fare) are available without challenge due to freedom of religion (no one can test if you’re Jewish…right?) and Morello takes on many male visitors, hoping to find some company and attention. The rest of the episode seems like minutiae in comparison to Chang’s fascinating past.

“Hey lesbians! My eyes are squinty, but my ears work fine.” – Chang

I'm Sly, I'm 24 and I reside in Houston, TX. I live with my cat, Ladybird and I work in finance - until 2016, when I will begin studying to be a therapist. I'm an ENFJ lesbian, obsessed with disc golf and I have a bachelor's degree in psychology & professional writing. If you give me chocolate covered strawberries I'll love you forever.
By slyveit