The following blog post is an updated version of something I wrote on my blog a few months ago.

A few months ago, Alex Gabriel wrote a piece called Jesus was not a queer ally. In it, he reminds readers that Jesus never said anything about homosexuality, and, therefore, it does not automatically mean, “Gay is okay.” To paraphrase Gabriel’s reasoning, if you read the Sermon on the Mount, where Jesus says, “Ye have heard it said X, but I say unto Y,” he doesn’t mention anything about Leviticus 18:22. Perhaps if Jesus said, “Ye have heard it said, ‘Stone the queers,’ but I say unto you it’s okay to be queer,” then we wouldn’t have a problem. But since Jesus never said that, homophobia, according to Gabriel, is still permissible in most evangelical churches.

(Of course many Christians use Matthew 19:12 as proof Jesus thought being gay is okay, but I’ll let the scholars figure that one out.)

It’s not an accident queer-affirming Christians have emerged as an organised force within the last century, with major figureheads like Desmond Tutu: they follow a long, slow period of secularisation in which Christianity’s social heft diminished (largely thanks, I must point out, to loudmouth atheists). Only secularisation allows genuine plurality, giving every point of view breathing space – the price of this, as the queer community must learn, is not placing God at the heart of public space. It’s a small one.

Shortly thereafter, Heina Dadabhoy echoed Gabriel’s sentiments, and wrote about their own experiences being marginalized as an atheist in queer spaces:

It is bizarre, to say the least, to sit in a room filled with LGBT folks and hear nothing but praise for religion and disdain for criticism of religion. Any mention of the homophobia in Christianity or any other religion was treated as if it were taboo, or at least unnecessarily hostile. I found myself feeling an odd sense of longing for the openly-homophobic Muslim I had encountered on an interfaith panel I had done at a local high school. He at least acknowledged the anti-queerness in his faith rather than pretended it didn’t exist and wasn’t relevant to the discussion.

Shortly before I came out as queer, I became an ally after reading Jesus, the Bible, and Homosexuality. When I eventually came out, all my Christian friends were very supportive, and I found a church that welcomed queer people. I thought there was no dichotomy between religion and being queer. Now, as a humanist, I see things differently. I still think it’s possible to be either a queer person of faith or an ally of faith, but to be honest, the acceptance of LGBTQ people has nothing to do with religion. In fact, I think queer-affirming Christians are applying humanistic reasoning to scripture rather than discovering “what the Bible actually says.”

When a new piece of information comes to light that contradicts previously-held beliefs and social norms, humanists rely on science and reason to test the information again and again to see if it holds any water. If it does, then humanists use this new information to help them better understand the nature of the world and humankind.

Religion, on the other hand, relies, for the most part, on dogma and doctrine. Religious leaders construct these doctrines based on scriptures written during a time when humankind had limited knowledge about how the world and humankind work. When a new piece of information comes to light that contradicts these socially constructed norms and doctrines, religious leaders tend to automatically dismiss it as blasphemy and heresy. For the most part, religions eventually accept new information, although most of the time it’s not without kicking and screaming.  (In fact, it wasn’t until 1992 that the Vatican officially pardoned Galileo.) Even then, there are certain branches of Christianity that still stick to myths that have long since been debunked, like young-earth creationism.

This is why I think humanism, science, and reason have done more for queer rights than religion. That’s not say that the secular world has always been a champion for queer rights, of course. After all, it wasn’t until 1973 that both the American Psychiatric Association and the American Psychological Associate declassified homosexuality as a mental illness. But even that came after years and years of scientific research, so the secular world eventually figured it out. Now there is no debate among humanists about whether or not queer people should deserve equal rights. Religion, on the other hand, is about fifty miles behind, if not more.

Now I should point out that religion is getting better about LGBTQ rights. Indeed, according to the graph below from Pew Research Center, evangelicals are slowly starting to support marriage equality. 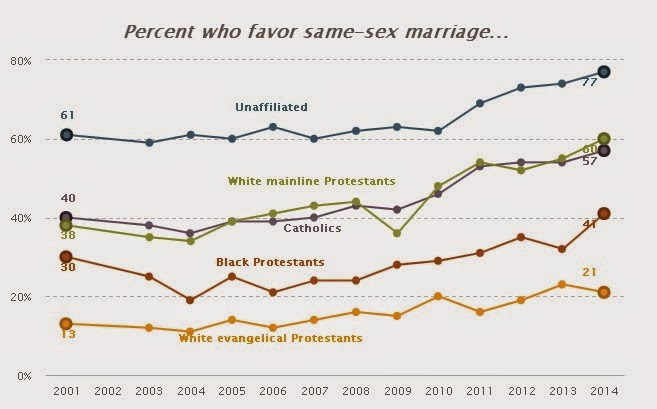 However, according to this graph, white evangelical protestants are still the least likely religious group (or at least the least likely Christian group) in American to support marriage equality, while those unaffiliated with any religion are still the main supporters. As the graph clearly shows, none of the religious groups numbers match the overwhelming support for marriage equality among the so-called “nones.” Until the green, purple, brown, and orange lines overlap the blue line, humanism will remain the best option for LGBT rights.

Which is why I agree with both Gabriel and Dadabhoy; queer spaces should remain secular. No, I don’t mean that queer people of faith aren’t allowed, or that they should leave their religious identities at the door. Neither am I suggesting that queer allies of faith aren’t real allies. When I say queer spaces should remain secular, I mean that queer spaces should remain religiously neutral. If your god loves queer people, that’s fine with me. Just don’t proselytize me when we really should be talking about queer liberation. I hate to break it to you, but some of us queer folks honestly want nothing to do with religion. It’s not just because we’ve been burned by religion (although that’s one of the major reasons); it’s because there is no evidence that any kind of higher power.

I don’t know if Jesus was a queer ally (or even if he actually existed), but humanism sure is!

Trav Mamone is a bisexual genderqueer Humanist writer. They blog at Bi Any Means, and host the Bi Any Means Podcast. They live in Maryland.
By Trav Mamone